If you build in states such as Florida, Texas, and North Carolina, you have likely come across more than a few northerners who decided to leave their cramped and expensive apartments for something more comfortable (and often less expensive). My brother didn’t end up leaving the state, but he did leave Manhattan for Brooklyn. This week’s blog is about the kitchen transformation he experienced, but first, a bit of background.

To describe my brother as a “foodie” just wouldn’t do it justice. My brother is a writer who writes about food, went to Italy to work for a famous Tuscan butcher, then went to France to learn how to become a French chef. He has written two books on his overseas cooking experiences and is now doing a great video series on French cooking for The New Yorker.

Ironically, this super-duper foodie writer and video star has had some of the worst kitchens. Understand, he lives in New York City, so he was never going to have the grand kitchens we enjoy in the suburbs. His first NYC flat overlooked swanky Grammercy Park. To describe where he prepared food as a “kitchen” is an insult to our entire industry. He had a small alcove – smaller than my walk-in closet – out of sight from the rest of the flat. It had a commercial-grade gas stove jammed against the outside wall for venting with little adjacent prep area. The refrigerator is not even in the same space. Even with the size constraints, this was an ill-conceived excuse for a kitchen (though I must give credit to the photographer who managed to hide most of its unfortunate misgivings – however, the floor plan does not lie). 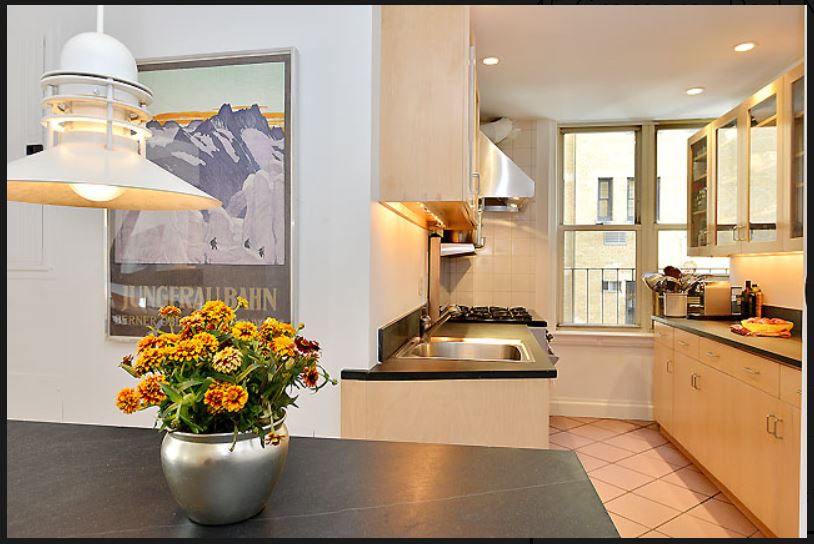 So, when he and his lovely wife Jessica selected their next NYC flat, the new kitchen was a chef’s dream come true in comparison. Unlike the previous kitchen, it was open to the dining and living area and its awesome natural light from floor to ceiling windows. The person cooking was no longer banished to the corner, out of sight. It looked chic with white cabinets, black granite counter tops and stainless-steel gas stove. It even had a built-in microwave, something the previous kitchen lacked. By comparison, this kitchen seemed liked a perfect solution for their family.

Ah, but looks can be deceiving. There was so much wrong with this kitchen including ingress, incorrectly placed appliances, and a serious lack of storage.

His kitchen was a “C” shaped kitchen with only one way in and out. At the entrance to this dead-end kitchen was the refrigerator. That means when someone opened the refrigerator, they completely blocked ingress and egress from the kitchen. This arrangement might be acceptable for one person living alone, but not for a family. By now, the builders reading this are noting there were three corners in the kitchen in which to seam the counter – not a fun project by any means. 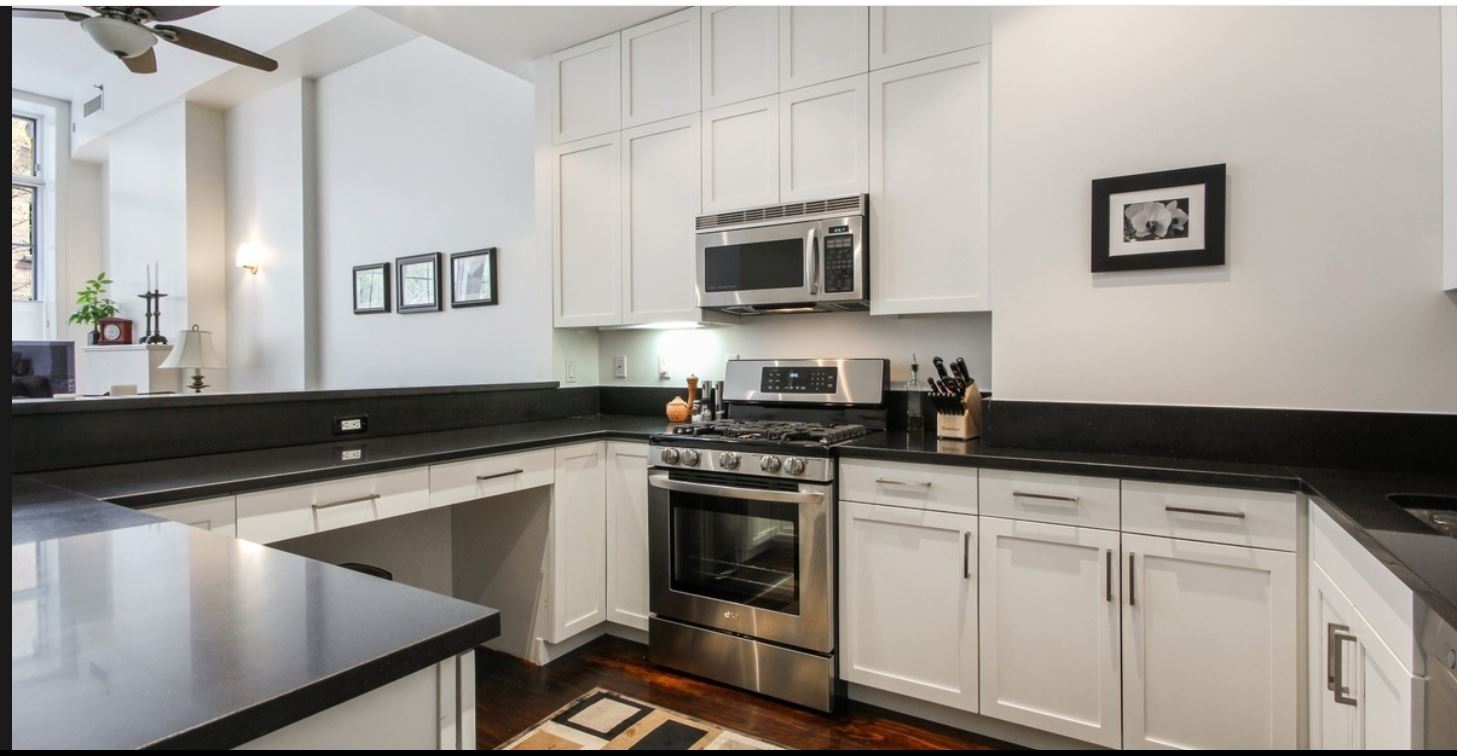 As mentioned above, the refrigerator was in the wrong place but so was the kitchen sink. It faced a blank wall so anyone washing anything from vegetables to dishes to their hands had their back to the rest of the family. You might not think that is such a big deal until you realize that my brother dirties more pots and pans preparing one meal than most families will dirty in a week. That amount of cookware cannot fit in even the most up-to-date dishwashers, banishing the person washing the dishes to the corner. Yes, it had a dishwasher but little room to stack dishes prior to loading it. 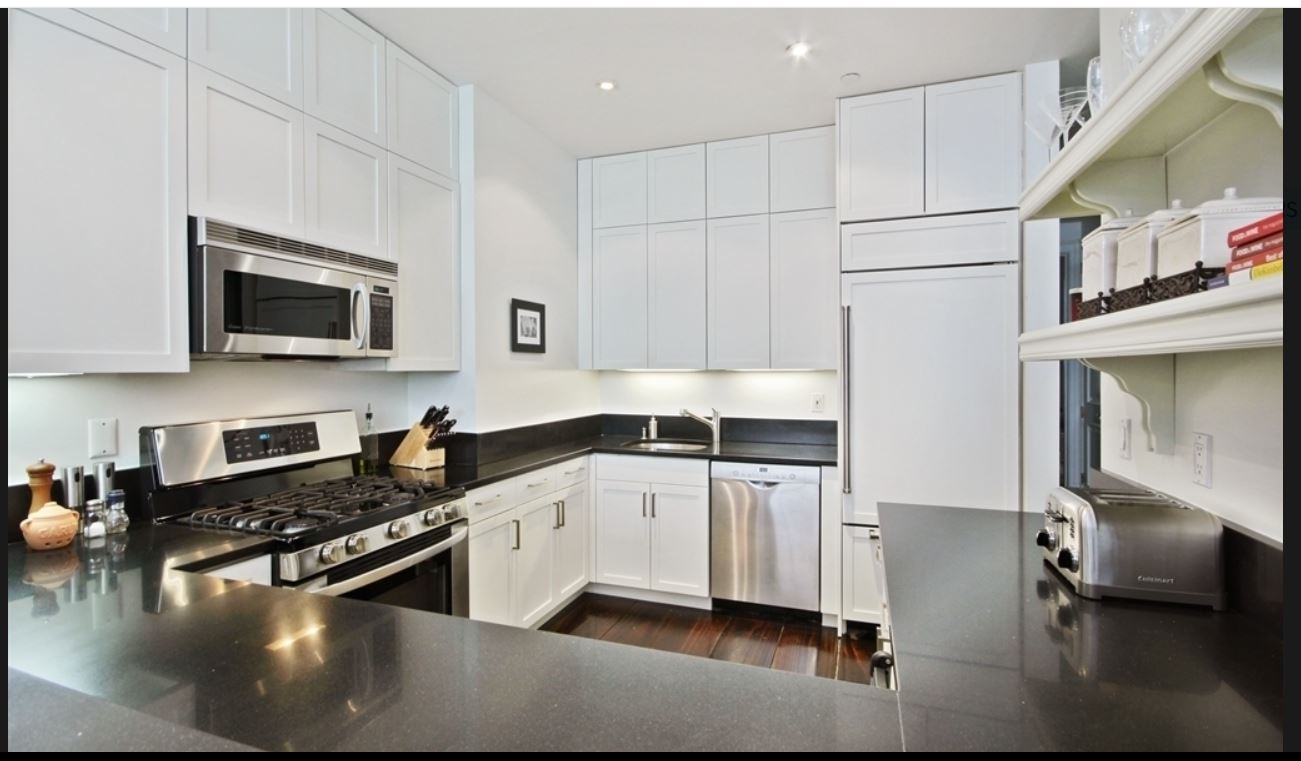 Your average everyday cook would bristle at the lack of storage. For starters, there was no pantry! Where are you supposed to put your food? On the open shelves along one wall. You quickly see the pitfalls of having your food constantly on display with open shelving. But my brother is not your everyday cook. He has food appliances I haven’t even heard of, let alone use on a regular basis. Of course, there is the standup mixer – to heavy to move in and out of a cabinet when you need it. Then there is the meat slicer which is big and bulky and needs space around it to use. Did I mention his fancy coffee maker? The one that grinds the coffee and can make everything from espresso to cappuccinos and is the size of the first microwaves from the sixties. Last, let’s not forget the pots and pans of all sizes from small to giant, mixing bowls, roasting plans, toasters, and gadgets cramming every square inch of his kitchen. My OCD readers are probably sweating at this point.

As a resident of one of the most locked down cities in America, it didn’t take long for their idyllic flat to become unsuitable for a family of four. So last month, they made the “big move” from Manhattan to Brooklyn with a four-story Brownstone with an up-to-date kitchen. You know – one with an island! That means there are two ways into the kitchen – perfect solution for a family of four with two teenage twin boys. The sink is in the island which means washing the thousands of pots and pans will seem less dreary. The island has an overhang, perfect for the boys to slide up to and grab a quick meal or Jessica to converse with her chef want to be husband. 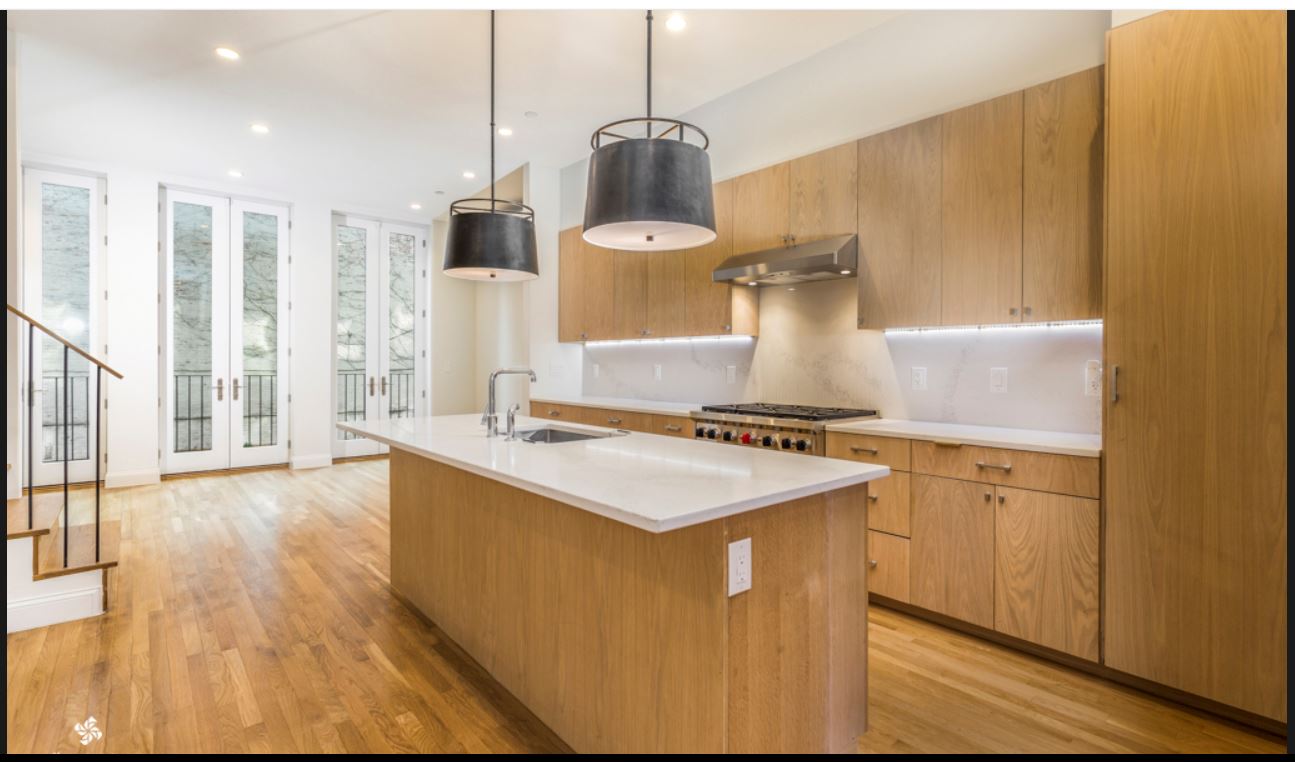 The kitchen is in the middle of the main living level open to both the living room to the front and the dining room to the rear and in front of the winding staircase. I can just image the magical food smells wafting up the stairs and making everyone hungry. (It is making me hungry just typing this) 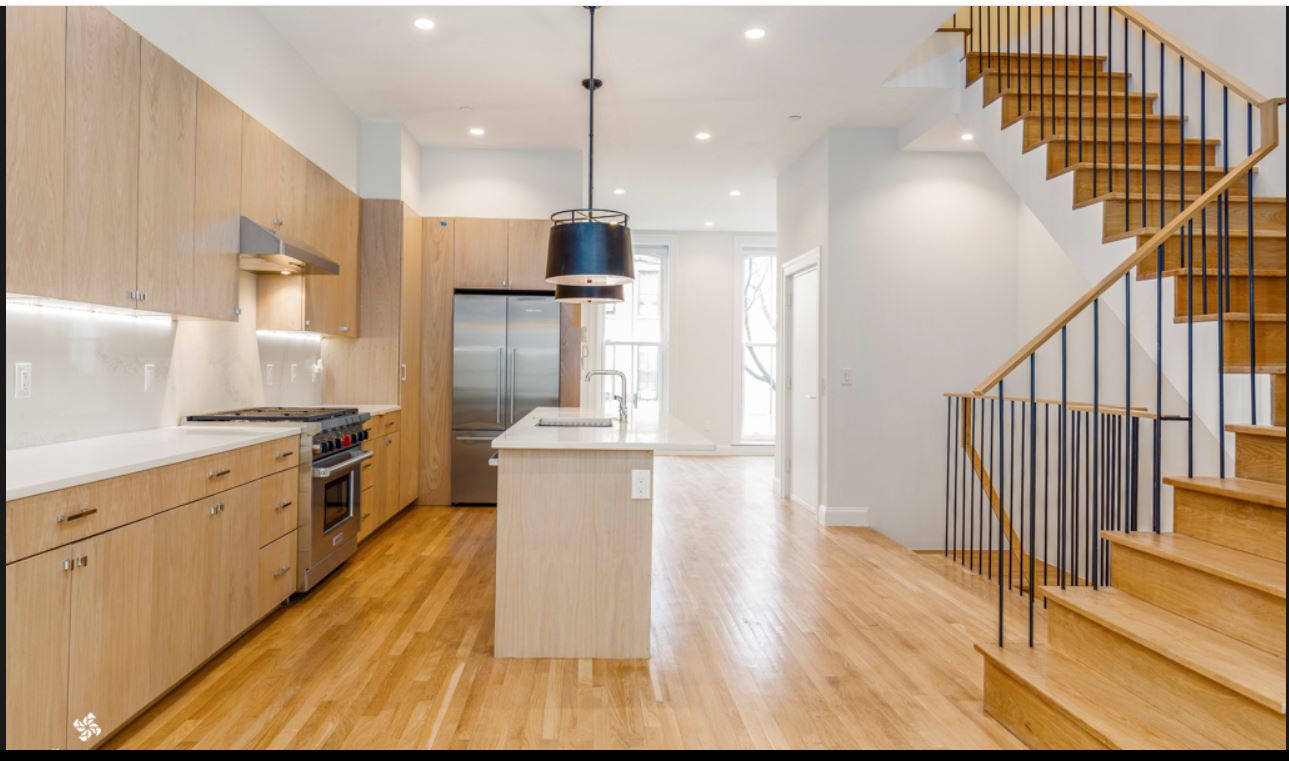 The refrigerator has French doors making them less obtrusive when opened – which will happen often with teenage boys. The gas range is massive with six burners! This will serve him well – and plenty of prep space on either side of the cooking surface. Alas, there is no microwave – yet. It seems to have more storage with lots of cabinets, but will it be enough? With all my brother’s cooking essentials, organizing and unpacking will be quite the undertaking. It does have a cabinet pantry – again will it be enough? Let’s just say I’m glad that I live too far away to help with moving in. 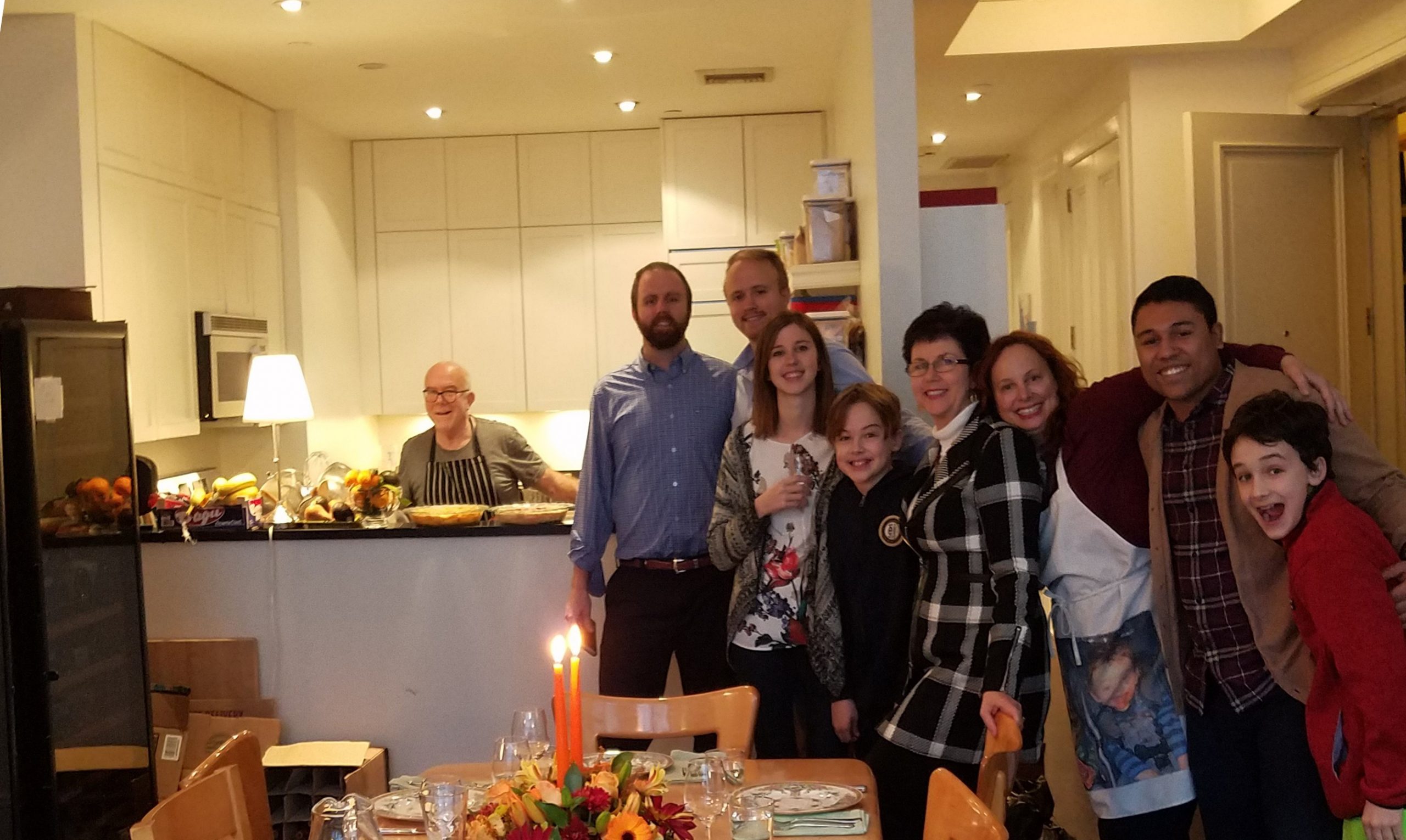 Time will tell how the family adjusts to the new kitchen. We hope to see it in person soon (after he is fully moved in) but perhaps even sooner once my brother’s videos (filmed and produced by his sons) resume.

You might be wondering like me how he has managed all these years with not just small, but poorly-designed kitchens. Many moving from the Big Apple have adjusted to making the most of their cramped quarters – because up until recently, the tradeoff was worth it.

Have you been able to “WOW” New Yorkers with your enormous kitchens and outdoor living? I’d love to hear some of your favorite stories!